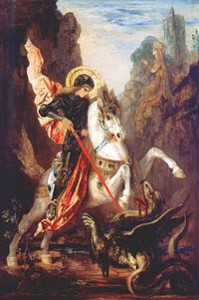 St. George, Heroic Catholic soldier and defender of your Faith, you dared to criticize a tyrannical Emperor and were subjected to horrible torture. You could have occupied a high military position but you preferred to die for your Lord. Obtain for us the great grace of heroic Christian courage that should mark soldiers of Christ. Amen

Almighty and eternal God! With lively faith and reverently worshiping Thy divine Majesty, I prostrate myself before Thee and invoke with filial trust Thy supreme bounty and mercy. Illumine the darkness of my intellect with a ray of Thy heavenly light and inflame my heart with the fire of Thy Divine love, that I may contemplate the great virtues and merits of the Saint in whose honor I make this novena, and following his example imitate, like him, the life of Thy Divine Son.

Moreover, I beseech Thee to grant graciously, through the merits and intercession of this powerful Helper, the petition which through him I humbly place before Thee, devoutly saving, “Thy will be done on earth as it is in heaven.” Vouchsafe graciously to hear it, if it redounds to Thy greater glory and to the salvation of my soul. Amen.

O GOD, who didst grant to Saint George strength and constancy in the various torments which he sustained for our holy faith; we beseech Thee to preserve, through his intercession, our faith from wavering and doubt, so that we may serve Thee with a sincere heart faithfully unto death. Through Christ our Lord.
Amen.

Faithful servant of God and invincible martyr, Saint George; favored by God with the gift of faith, and inflamed with an ardent love of Christ, thou didst fight valiantly against the dragon of pride, falsehood, and deceit. Neither pain nor torture, sword nor death could part thee from the love of Christ. I fervently implore thee for the sake of this love to help me by thy intercession to overcome the temptations that surround me, and to bear bravely the trials that oppress me, so that I may patiently carry the cross which is placed upon me; and let neither distress nor difficulties separate me from the love of Our Lord Jesus Christ. Valiant champion of the Faith, assist me in the combat against evil, that I may win the crown promised to them that persevere unto the end.  Amen

St. George
George was canonized as a saint by Pope Gelasius I, among those Saints “whose names are justly reverenced among men, but whose acts are known only to God.”

It is uncertain when Saint George was born and historians continue to debate to this day. However, his death date is estimated to be April 23 303 A.D.
The first piece of evidence of George’s existance appeared within the works of the Bollandists Daniel Papebroch, Jean Bolland, and Godfrey Henschen’s Bibliotheca Hagiographica Graeca. George was one of several names listed in the historical text, and Pope Gelasius claimed George was one of the saints “whose names are justly reverenced among men, but whose actions are known only to God.”
George was born to a Gerontios and Polychronia, a Roman officer and a Greek native of Lydda. Both were Christians from noble families of the Anici and George, Georgios in the original Greek, was raised to follow their faith.
When George was old enough, he was welcomed into Diocletian’s army. by his late 20’s, George became a Tribunus and served as an imperial guard for the Emperor at Nicomedia.
On February 24, 303 A.D., Diocletian, who hated Christians, announced that every Christian the army passed would be arrested and every other soldier should offer a sacrifice to the Roman gods.
George refused to abide by the order and told Diocletian, who was angry but greatly valued his friendship with George’s father.
When George announced his beliefs before his peers, Diocletian was unable to keep the news to himself.
In an effort to save George, Diocletian attempted to convert him to believe in the Roman gods, offered him land, money and slaves in exchange for offering a sacrifice to the Roman gods, and made several other offers that George refused.
Finally, after exhausting all other options, Diocletian ordered George’s execution. In preparation for his death, George gave his money to the poor and was sent for several torture sessions. He was lacerated on a wheel of swords and required resuscitation three times, but still George did not turn from God.
On April 23, 303 A.D., George was decapitated before Nicomedia’s outer wall. His body was sent to Lydda for burial, and other Christians went to honor George as a martyr.

Saint George and the Dragon
There are several stories about George fighting dragons, but in the Western version, a dragon or crocodile made its nest at a spring that provided water to Silene, believed to be modern-day Lcyrene in Libya.
The people were unable to collect water and so attempted to remove the dragon from its nest on several ocassions. It would temporarily leave its nest when they offered it a sheep each day, until the sheep disappeared and the people were distraught.
This was when they decided that a maiden would be just as effective as sending a sheep. The townspeople chose the victim by drawing straws. This continued until one day the princess’ straw was drawn.
The monarch begged for her to be spared but the people would not have it. She was offered to the dragon, but before she could be devoured, George appeared. He faced the dragon, protected himself with the sign of the Cross, and slayed the dragon.
After saving the town, the citizens abandoned their paganism and were all converted to Christianity.

Interesting Facts
• Saint George stands out among other saints and legends because he is known and revered by both Muslims and Christians.
• It is said Saint George killed the dragon near the sea in Beirut, thus Saint George bay was named in his honor.
• Saint George’s feast day is celebrated on April 23, but if it falls before Easter, it is celebrated Easter Monday.
• The Russian Orthodox Church celebrates three St. George feast days each year -April 23 as is expected, November 3, to commemorate the consecration of a cathedral dedicated to him in Lydda, and on November 26, for when a church in Kiev was dedicated to him.
• In Bulgaria, his feast day is celebrated May 6 with the slaughter and roasting of a lamb.
• In Egypt, the Coptic Orthodox Church of Alexandria calls St. George the “Prince of Martyrs” and celebrates on May 1. There is a second celebration November 17, in honor of the first church dedicated to him.
• Saint George is the patron saint of England and Catalonia and his cross can be found throughout England.
• In older works, Saint George is depicted wearing armor and holding a lance or fighting a dragon, which represents Christ’s enemies.

Prayer for St. George
St. George,
Heroic Catholic soldier and defender of your Faith, you dared to criticize a tyrannical Emperor and were subjected to horrible torture. You could have occupied a high military position but you preferred to die for your Lord. Obtain for us the great grace of heroic Christian courage that should mark soldiers of Christ. Amen

Permanent link to this article: https://bookofheaven.com/prayers/saint-george/