Eve of the Solemnity of the Mother of God

and eve of the New year! 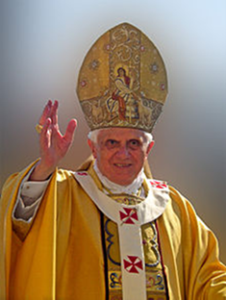 In the Name of Jesus – Great High Priest

and through the intercession of the little daughter of the Divine Will Luisa Piccarreta!

you shall receive a never fading Crown of Glory.”

V14 – 7.10.22 – “Blessed Jesus took the Cross and placed it upon the shoulders of the Holy Father, Helping him carry it Himself.  While doing this, He added: “My Church seems to be dying, especially with regard to the social conditions, which anxiously wait for the cry of death. But, courage, My son; after you have reached the top of the mountain, as the Cross is lifted up, all shall be SHAKEN, and THE CHURCH WILL LAY DOWN HER ASPECT OF A DYING ONE, AND SHALL REACQUIRE HER FULL VIGOR.”
V20 – 10.24.26 – “Therefore, as though tired, they all Pray (all Creation and all the Works of Redemption) that the Kingdom of My Will may COME INTO THE MIDST OF CREATURES, so that One may be the Nobility, the Honor and the Glory of this Family. And in seeing that the Little Daughter of My Will Comes into their midst, and, Animating them, Asks and makes everyone Ask for the Coming of the Kingdom of the Supreme Fiat into the midst of creatures, they all feel Delighted, because their SORROW IS CLOSE TO ENDING.”
First Mass of Joseph Ratzinger July 8, 1951: 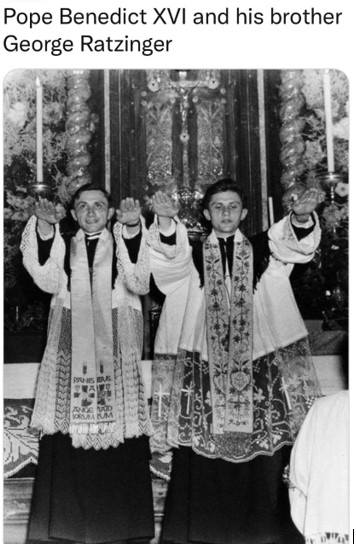 https://www.vaticannews.va/en/vatican-city/news/2022-12/pope-emeritus-benedict-xvi-dies-aged-95.html
Pope Francis will preside over the funeral of the Pope Benedict XVI on 5 January at 9.30 CET in St. Peter’s Square. 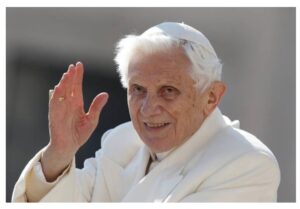 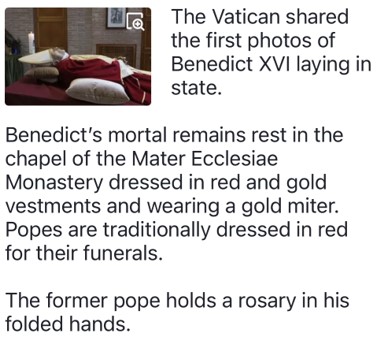 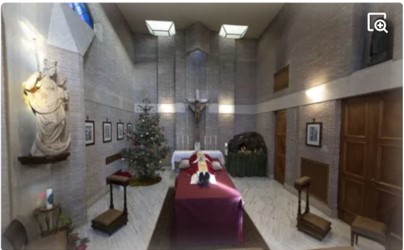 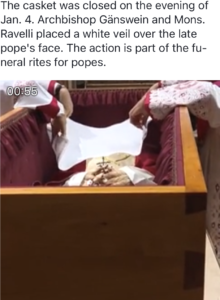 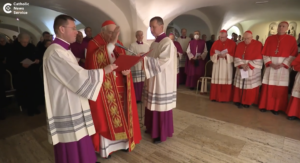 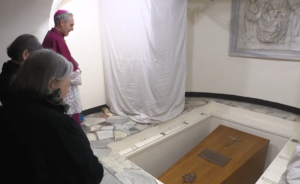 Prayer for a Deceased Pope (from the Roman Missal) Catholic Online Prayers (https://www.catholic.org/prayers/)

“God, Who, in Thine Ineffable Providence, didst Will that Thy servant N… should be numbered among the high priests, grant, we beseech Thee, that he, who on earth held the place of Thine only-begotten Son, may be joined forevermore to the fellowship of Thy holy pontiffs. Through the same Jesus Christ, Thy Son, Who liveth and reigneth with Thee in the Unity of the Holy Ghost, God, world without end. Amen”

“Purity of heart is what enables us to see.”
“Evil draws its power from indecision and concern for what others think.”
“We are not some casual and meaningless product of evolution. Each of us is the result of a thought of God.”
“The world offers you comfort. But you were not made for comfort. You were made for greatness”
“The Lord wins in the end.” 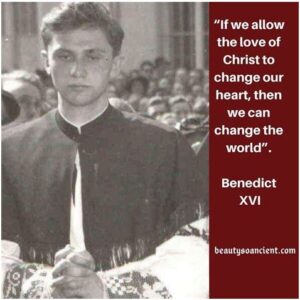 In Peter Seewald’s recent book, interviewing Pope Benedict, he asked: “Do you see yourself as the last Pope of an old era or the first Pope of a New Era?”
“I would say both. I don’t belong to the old world anymore, but the new world isn’t really here yet…Seismic upheavals are now underway. But we do not yet know at which precise point we can say that there begins one, and there another.” – Pope Benedict XVI

In a separate letter responding to the Munich investigation that served as a profound and memorable coda for his ministry as a priest, archbishop, and pontiff, the Pope Emeritus asked for the forgiveness of abuse survivors, noting that he had “borne great responsibility in the Catholic Church.”

Concluding his letter, Benedict looked toward his judgment before God.

“Quite soon, I shall find myself before the Final Judge of my life. Even though, as I look back on my long life, I can have great reason for fear and trembling, I am nonetheless of good cheer, for I trust firmly that the Lord is not only the Just Judge, but also the Friend and Brother Who Himself has already Suffered for my shortcomings, and is thus also my Advocate, my ‘Paraclete,’” he wrote.

“In Light of the Hour of Judgment, the Grace of being a Christian becomes all the more clear to me. It grants me knowledge, and indeed friendship, with the Judge of my life, and thus allows me to pass confidently through the dark door of death.”

“In this regard,” he concluded, “I am constantly reminded of what John tells us at the beginning of the Apocalypse: he sees the Son of Man in all His Grandeur and falls at His Feet as though dead. Yet He, placing His Right Hand on him, Says to him: ‘Do not be afraid! It is I…’” 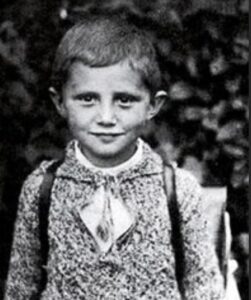 Pope Benedict XVI pray for us! Pray for Holy Mother the Church! 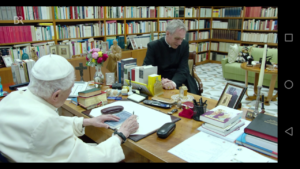 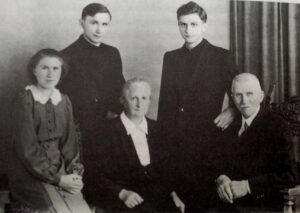 For more on Pope Benedict XVI:

according to God’s Holy Divine Will!

Permanent link to this article: https://bookofheaven.com/2015-conference/pope-benedict-xvi-enters-eternity/