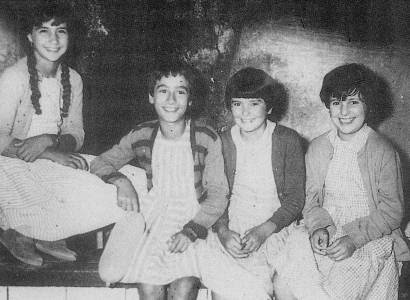 Dear Friends,
The COVID-19 pandemic has brought about an immense health crisis and will most likely be joined by an economic and social crisis before too long. The suffering endured these days by so many families will also leave scars on a psychological and emotional level: many people are having to face near-death situations entirely alone, others are currently unable to accompany their loved-ones and have not had time to ask for forgiveness or make up for past wrongs. The list of sorrows continues to grow.

In an entirely different way, Garabandal, Only God Knows, is also suffering the consequences of this epidemic. When the coronavirus first reached Europe, the Garabandal movie was playing in theaters in France. It had already premiered in 29 countries and had been seen by almost 300,000 people. More than 10,000 people had already seen it in France alone and many more were expected to fill the theaters during the scheduled screenings in the months of March and April. All of this was canceled when the theaters were forced to close. We also had to postpone the premieres planned for the month of March in Singapore, Switzerland and Australia and during April in the United Kingdom, Canada, Brazil, Portugal, and Holland.
This was when we decided that perhaps the moment had arrived to upload Garabandal, Only God Knows to our YouTube channel to be seen free of charge around the world. Currently, however, we are unable to do so, because the distributors in the countries where we still have contracts in place hope to be able to premiere in theaters once the virus has passed.

Even so, we have found a solution that both respects the contracts and at the same time allows us to make the film available free of charge during Holy Week 2020. We are proud to announce that from April 3-12, 2020; that is, from the Friday before Holy Week through Easter Sunday, Garabandal, Only God Knows will be available for viewing online free of charge both in Spanish and English on the film’s official webpage:

It will be available in all countries, except for the following countries, where we hope to premiere in the near future in movie theaters: Canada, Singapore, Holland, Brazil, Poland, Germany, Switzerland, Austria, France, and Belgium.

Garabandal, Only God Knows came into existence to bear a message of hope to all humanity, a message that in these times is more necessary than ever. Our Lady came to Garabandal to tell us that she loves us and that she is very worried about our salvation. The current circumstances have, in God’s providence, become an invitation to live the most memorable Lent and Holy Week of our lives, and this must lead us to a deep examination of conscience and a profound desire for true conversion. Share this email with your family and friends and help to spread this message of hope and this call to conversion with the whole world.
In many places, due to the mandatory lockdowns, the faithful will not even be able to assist the Easter Triduum liturgies. Now, more than ever, our homes must become true domestic churches that learn from Our Lady of Sorrows to contemplate the mystery of Jesus’ passion, death and resurrection. May she extend her blessing upon you and your family in this time of need.
God bless,
Miriam
Mater Spei English
english@materspei.com

The story behind the film:

Garabandal, Only God Knows is based on real life events that took place in a small village in Spain in the 1960s. The small village of San Sebastian de Garabandal was marked by the presence of the Most Blessed Virgin Mary. In nearly 3,000 public apparitions between the years 1961 and 1965, she appeared to 4 girls, between 11 and 12 years of age: Conchita González, Mari Cruz González, Jacinta González y Mari Loli Mazón.
The first apparition took place on June 18th, 1961. St. Michael the Archangel appeared to the four girls during a period of several days in order to prepare them for the coming of Our Lady. She would appear on the Sunday afternoon of July 2nd, 1961.

These apparitions to the girls in Garabandal continued for four years. The day-to-day events in Garabandal were a message in themselves. The Virgin Mary interacted with the girls like an authentic mother. She won them over with her tenderness and her gestures of affection. She spoke with them, giving them confidence so that they could express themselves and tell Her everything. She made the most of these conversations to educate them. She also corrected them when necessary and played with them. The apparitions ended on November 13, 1965.

October 18, 1961:
We must make many sacrifices, do much penance, and visit the Blessed Sacrament. But first, we must be very good. Otherwise, a chastisement will befall us. The cup is already filling up, and if we do not change, a very great chastisement will come upon us.

June 18, 1965:
Since my message of October 18 has not been heeded and made known to the world, I tell you that this is the last one. Before, the cup was filling up. Now, it is brimming over. Many cardinals, many bishops, and many priests are following the way to perdition and are taking many souls with them. Ever less importance is being given to the Holy Eucharist. You must turn the wrath of God away from you by your efforts. If you ask His forgiveness with a sincere heart, He will pardon you. I, your Mother, through St. Michael the Archangel, wish to tell you to amend your lives. You are now in the last warnings! I love you very much, and I do not want your condemnation. Ask Us sincerely, and We will grant your plea. You must make more sacrifices. Reflect on the Passion of Jesus.

What does the Church say about the apparitions?

The Diocese of Santander has always maintained that it has not found anything contrary to the faith of the Church in the doctrinal content of the apparitions in San Sebastián de Garabandal. This is important. Regarding the phenomena in themselves, it affirms “not confirmed to be of supernatural origin,” thus confessing that the case is not closed, much less condemned, as the interventions of the Congregation for the Doctrine of the Faith also confirm.

When the conclusion of a study is not clearly seen, when facts are missing, or when the origin of an event is not yet known for certain, the Church then declares non constat de supernaturalitate (not confirmed to be of supernatural origin). This does not mean that there has not been an apparition. It means that the supernatural origin of the events it is not yet confirmed and that certain information necessary to make a clear judgment is still missing.

The film respects that the Church has yet to make a definitive decision on the apparitions and specifically states at the beginning of the film that: “This movie is based on real events that occurred in San Sebastián de Garabandal, Spain, between 1961 and 1965. The definitive evaluation of those events is the responsibility of the Catholic Church, to whose judgement we submit.”

For more information on the Church’s statements and current position: https://garabandal.it/en/documentation/the-church-s-position

When the film was originally planned, the idea was to present the objective facts of what took place in Garabandal during the apparitions and, in particular, to focus in on the credibility of the apparitions. Our Lady gave many signs (especially through the ecstasies) to help us “modern men” to believe. The film producers have decided to focus in on the credibility of what took place, as well as faithfully transmitting the overall message of Our Blessed Mother: her maternal love and the call to conversion.

Permanent link to this article: https://bookofheaven.com/2015-conference/garabandal-only-god-knows/