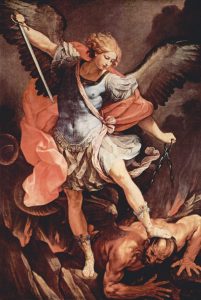 I am calling upon the Powerful Prayer Warriors of the Redeemer, the Son of God.

You are now in the end times of your world,

and I call upon those of you who are in the United States and Russia, in particular, to bind yourselves together in prayer for the future of the world, for the peace and prosperity of the future will depend on your two great countries to defeat the new world order and their plans to create a third world war between your countries.

All the Redeemer’s sons and daughters in the world, and particularly in the United States and Russia, must pray powerfully and support your leaders who want peace and prosperity, as opposed to the evil one’s new world order which has survived and thrived through the centuries by creating divisiveness, hatred and war between the peoples of the world.

It is the plan of the Father in Heaven to defeat this evil that satan and his minions have devised against humanity, and now it is time for the people of the world to support the leaders who want nothing but peace and prosperity for the people.

For the first time in centuries, the leaders of the world can bring about world peace and democracy throughout the world, but satan and his minions will use the evil one’s evil basket of tools and weapons to thwart the plans of your leaders who have the best intentions for the people.

As Powerful Prayer Warriors, it is your responsibility to support these leaders and their intentions for a better world.

frequent veneration and reception of the Holy Eucharist.

The most powerful gift of the Father in Heaven through His Son, the Redeemer, and through the power of the Holy Spirit is the sacrament of the Holy Eucharist.

If you do as I say, you will usher in a new era of peace for humanity and contribute to the destruction of the evil one and his plans to destroy humanity.

frequent veneration and reception of the Holy Eucharist.

But you must act quickly and decisively now for the evil one and his minions are near to being defeated and cast into the bowels of darkness.

You may recognize in the air that the threat of world war is being diminished. Recognize that this is a sign from the Father in Heaven that the great transformation is near and pray that the evil one is finally thwarted in his plans to destroy humanity.

If you align yourselves in prayer and through the

frequent veneration and reception of the Holy Eucharist,

the power of your works will go a long way

to ushering in a renewed Era of Peace and a New Heaven and a New Earth.

Thanks be to God!

Permanent link to this article: https://bookofheaven.com/prayers/st-michael-8-2-18-message/

Prayers Good Morning and Good Evening to Jesus Consecration Prayer Yearnings for Sanctity Little Chaplet of Divine Will Nine Excesses of Love Luisa please intercede before the Throne of God for Peace throughout the world Please Pray the Twenty-Four Hours Holy Thur to Good Friday Luisa’s Prayer for dying souls Prayer to Luisa Saint Michael the Archangel Saint George Novena for the 69th Anniversary of Luisa’s Passing into Eternity Saint Benedict St. Michael 8.2.18 Message Prayer from Ash Wed to Divine Mercy Sunday Stations of the Cross Novena for Luisa’s Birthday Novena to St. Annibale Nine Day Novena – Birthday of Our Lady Praying for Mercy in the Divine Will National Novena to the Patroness of the USA Novena to Christ the King Divine Will Prayer Group Meeting Format December 8 Hour of Grace Plenary Indulgence Nov 1 – 8 Anointing with the Holy Spirit Consecration to Our Lady of Loreto One Thing Necessary Portiuncula Indulgence – Aug 2 Prophecy of Fr. Joseph Ratzinger Te Deum Prayer