“While still a child, I kept hearing the name of a woman who had been bedridden for more than forty years. My mother was fond of her, and often spoke about her. Especially in the moments of sorrow and oppression, she would run to her to implore her prayers. After twenty years, I went back to visit this soul again, and I found her always the same: placid and smiling, working with the fusetti of the tombolo in her hands, or with the rosary between her fingers, in attitude of prayer…Seventy years in bed! One entire long existence. Well, from 1878 to 1947, this soul spent her life in solitude, in suffering, in silence, and in prayer.

This soul had a name known to many: Luisa Piccarreta, called “Luisa, the Saint.”

10/2 – Feast of the Holy Guardian Angels (New/Trad) – “And since the Joys of Heaven are Communal, your Angel offers the accidental Beatitude he has received from you, his Doubled Paradise, to the whole Celestial Court as the Fruit of the Divine Will of his Protected one. All make Feast and Magnify and Praise the Power, the Sanctity, the Immensity of My Will. Therefore, be Attentive; in My Will one cannot lose time – there is much to do; you have to follow the Act of a God, which is never interrupted.” – V19 – 2.28.26

10/5 – St. Faustina Kowalska (1938/New)
– “Adorable Goodness, infinite Mercy, knowing that You are Mercy Itself, I have come to ask for Your Mercy – Mercy on Your very images, Mercy on the Works Created by You; Mercy upon no other but Your creatures themselves.” V6 – 4.16.04 – Luisa praying for Mercy, the following year Helena Kowalska (Saint Faustina) was born.

10/7 – OUR LADY OF THE ROSARY – (New/Trad) – instituted by Pope Gregory XIII in 1571 – “When the wicked heresy of the Albigensians was growing…St. Dominick implored with earnest prayers, the aid of the Blessed Virgin, Whose Dignity these errors shamelessly attacked and to Whom it is given to Destroy all heresies…She Instructed Dominic to preach the Rosary…Gregory XIII decreed that thanks should always be offered everywhere throughout the world to the Blessed Virgin under the title of the Rosary…and other Popes granted innumerable indulgences, added a Feast, added to the Breviary, Litanies, Special Office… ” Roman Breviary – Lessons iv, v, vi – Oct. 7. “In Me is All Grace of the Way and of the Truth;” – Ecclus. 24:25
https://bookofheaven.com/feasts-and-novenas/our-lady-of-the-rosary/

– Luisa enters St. Anthony’s orphanage 1928 – House of the Daughters of Divine Zeal and House of the Divine Will, built by St. Annibale Maria di Francia; and ten years later leaves because of orders from above 1938.
– “…here in Corato a House has been founded, which was wanted and started by the venerable memory of Father Canonical Annibale Maria di Francia, and which his children, faithful to the will of their founder, have executed and given the name of House of the Divine Will, as the venerable father wanted. And he wanted me to enter this House; and on the first day of its opening, by their goodness, his sons and daughters, the reverend mothers, came to take me and brought me into a room which is such that, as the door of this room is opened, I can see the Tabernacle, I can listen to Holy Mass, I am just under the Gazes of my Jesus in the Sacrament. Oh! how happy I feel, that from now on, if Jesus wants me to continue to write, I will write always keeping one eye on the Tabernacle and the other on the paper I write on. Therefore, I pray You, my Love, to assist me and to give me the strength to make the sacrifice that You Yourself Want.” V25 – 10.7.28

10/8 – Our Lady of Good Remedy (Hist) – 800 years ago Christians were being captured by the Moslems and sold into slavery by the thousands, and nobody knew what to do about it. In the year 1198 St. John of Matha founded the Trinitarian Order to go to the slave markets to buy the Christian slaves in order to set them free. To carry out his plan, the Trinitarians needed a large sum of money. So, they placed their efforts under the Patronage of Mary. They were so successful that, over the centuries, the Trinitarians were able to free thousands upon thousands of people who were able to return safely home. In gratitude for Her Miraculous Assistance, St. John of Matha honored Mary with the title “Our Lady of Good Remedy.”

10/11 – The Divine Maternity of Our Lady (Trad) – instituted in 1931 by Pope Pius XI in view of the fifteenth centenary of the Council of Ephesus. At the same time the Pope ordered at his own cost the restoration of the Marian mosaics in Saint Mary Major, much decayed through age. He issued an encyclical letter, “Lux Veritatis.” In this, among the objects of the new festival, is named one Truth that was particularly close to the heart of Pius XI, “…that Mary, Who is loved and revered so warmly by the separated Christians of the East, would not Suffer them to wander and be unhappily led further away from the unity of the Church, and therefore from her Son, Whose vicar on earth we are.”
https://luisapiccarreta.com/?s=divine+maternity

– Pope Saint John XXIII (1963/New) – born November 25, 1881; died June 3, 1963, Pope from 1958 to 1963 – Fifteen years after Luisa’s death, at the request of Don Calvi, Cardinal Cento, the Archbishop of Trani asked the Holy See to authorize the transfer of Luisa’s body from Corato’s city cemetery. On June 3, 1962, with the full permission of the Holy See, Luisa’s body was placed to the right of the central nave in the church of St. Mary the Greek.

10/12 – Our Lady of the Pillar (36/Hist) – In the year AD 36, while She was yet on earth, Our Lady Bilocated and Appeared to Saint James, the Apostle, on the banks of the river Ebro, near the city of Caesar-Augusta (now Zaragoza or Saragossa). She Appeared, Accompanied by Celestial Music, on a six-foot Pillar of Jasper. Her Purpose was to comfort and encourage St. James and his disciples. Our Lady Commanded that a chapel be built on the spot in Her Honor and She Promised Her Assistance to those who invoke Her. The Apostle was quick to carry out the Wishes of the Queen of Apostles.

10/13 – OUR LADY OF FATIMA – Miracle of the sun; OUR LADY OF AKITA – continuation of Fatima messages and 101 times Weeping; POPE LEO XIII remarkable vision, then he composes the St. Michael prayer and promulgated it worldwide; HEBREW CELEBRATION OF THE FALL HARVEST

– The Mercy and Generosity of God allowed that this day be the last of the 101 years of the great tribulation as revealed to Pope Leo XIII in the vision of October 13, 1884. It was Our Lady of Fatima, October 13, 1917, Who Alerted Her children of the beginning of this great tribulation period of 100 years. In Her messages and 101 times weeping, Our Lady of Akita Warned Her children of this ongoing period and imminent Chastisements, with an added year. How are we to know of this added year? Holy Mother Church gave us the Year of Mercy in 2016. Between October 13, 1917 and October 12, 2019 is 101 years. This makes October 13, 2019 the beginning of the NEW DAY.
– Genesis 1:5 – “And he called the light Day, and the darkness Night; and there was evening and morning, one day.”
https://bookofheaven.com/our-lady-of-america/prayer-and-fasting-for-our-lady-of-america-to-october-13/

10/19 – North American Martyrs (New) – Members of the Society of Jesus who dedicated themselves to the conversion of the American Indians took Christ’s Words very literally. They journeyed from Renaissance France to the frontiers of North America that they might preach and Baptize. After pouring the saving waters of Baptism on a dying Indian child, Saint John de Brebeuf, the great pioneer of this mission, exclaimed with joy, “For this one single occasion I would travel all the way from France; I would cross the great ocean to win one little soul for Our Lord!” And so pleased was God with the genuine zeal and the extraordinary sacrifices of these Jesuit apostles that He bestowed upon Father Brebeuf and seven of his fellow missionaries the glorious crown of martyrdom.

10/21 – Luisa’s 1st Mystical Marriage with Jesus (1888) – Day of the Purity of Mary Most Holy that year.
– “On the morning of the aforementioned day, Jesus made Himself Seen again all Affable, Sweet and Majestic, together with His Most Holy Mother and Saint Catherine. First, a hymn was Sung by the Angels, while Saint Catherine assisted me, Mama took my hand, and Jesus put the Ring on my finger. Then, we embraced and He Kissed me, and So did Mama also. Then we had a Conversation, all of Love – Jesus told me of the Great Love He had for me, and I also told Him of the love I had for Him. The Most Holy Virgin made me comprehend the Great Grace I had received, and the correspondence with which I was to correspond to the Love of Jesus.” – Vol.1

10/22 – Pope Saint John Paul II (2005/New) – Pope Saint John Paul II made history by becoming the first non-Italian pope in more than 400 years, October 16, 1978 to April 2, 2005. During his pontificate the following happened affecting the Cause of the Servant of God Luisa Piccarreta:
– March 4, 1987 – Canonical Decree issued for the Association of Luisa Piccarreta in Corato, Italy
– October 7, 1990 – in St. Peter’s Square, Pope John Paul II proclaimed Father Annibale Blessed – Feast of Our Lady of the Rosary (same day Luisa entered the House of Divine Will as St. Annibale wished 62 years before)
– November 20, 1994 – Feast of Christ the King – Archbishop Cassati officially opened the Cause for Beatification and Canonization of the Servant of God Luisa Piccarreta
– February 2, 1996 – Pope John Paul II permits copying original volumes of Luisa in Vatican Archives
– May 16, 2004 – Canonization of Annibale Maria di Francia – Luisa’s Confessor and Ecclesiastical Censor of her Writings, declaring him the Saint for Vocations and Father of orphans and the poor

10/27 – FEAST OF CHRIST THE KING (Trad)
– The Cause of Beatification and Canonization of the Servant of God Luisa Piccarreta began in Trani, Italy by Archbishop +Cassati in 1994 under the Pontificate of Pope Saint John Paul II
– “…This Knowledge (Divine Will) shall be a Powerful Magnet in order to Attract the creatures and make them receive the Inheritance of My Divine Will, and so as to make the Generation of the Children of Light Enter the Field – the Children of My Divine Will. Be Attentive, My daughter, Luisa; you shall be My Spokesperson – the Trumpet, to Call them and Gather this Generation, So Favored and Longed for by Me.” – V14 – 10.27.22
https://luisapiccarreta.co/?page_id=639

10/28 – Saints Simon and Jude, Apostles (New/Trad) – St. Simon (the Zealot, because nothing was too difficult for his Lord) and Saint Jude (Judas Thaddeus, wrote a Catholic Epistle of the New Testament. It is customary with many to pray to him in seemingly “hopeless” situations) are said to have preached in Egypt and Persia and to have suffered martyrdom for the faith in Mesopotamia.

10/29 – Diocesan Inquiry into the Saintly life of Luisa Piccarreta brought to a close by Archbishop +Pichierri in 2005 under the Pontificate of Pope Benedict XVI. Link to his homily:
https://luisapiccarreta.co/?page_id=854

Permanent link to this article: https://bookofheaven.com/monthly-reminders/october-reminders/

Round Book in Easter 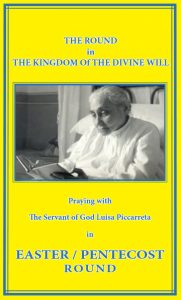 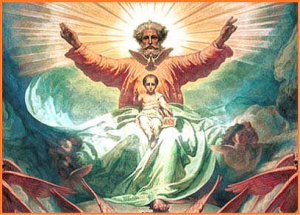