Return to Luisa Saved My Life

Another Miracle through Luisa

“I saw Luisa sitting, in like a courtyard with a beautiful floor, like a mirror, and she had lots of children around”

My name is Marta María Maegli. I was born and live in Guatemala City 50 years ago. I first knew about the writings of Luisa Piccarreta during the confinement last year. Somehow Luisa’s writings make ALL THE SENSE to me, and I feel like they are “the missing piece of the puzzle” whenever I read the Gospel or the Bible. So, I am “hooked” on Luisa! I get all the peace I am able to muster from Luisa’s writings…. It is like The Lord is soothing me with His words.

I met Reina De Paz about twenty years ago. She is a very good masseuse therapist, and since I have had back aches and problems. I have enjoyed the relief from her very good art of massage giving.

Soon after I met her all those years ago, her first husband, father of her first 3 kids, was assassinated. I did my best to help her in those difficult times. After some years, she got married again, and had two more kids. The last one is 6 years old now. Last year, around Christmas, her second husband succumbed to Covid. She did not get the chance to have a higher education, but has a great deal of common sense, and wisdom in approaching life. She is always positive and forward looking, and she is the sole bread provider for her 5 kids. She is a breast cancer survivor.

When she first got Covid around June this year, she was very scared. I sent her all the medicines my doctor advised me, and Thanks be to God, she made it through. Since she is the sole provider for her home, she started working right away. She works giving massages and beauty parlor services at home. I am pretty sure that she did not give her body enough time to recover well from Covid, so she became very sick again, with Acute Pancreatitis. The doctor who treated her first, sent her to a public hospital that is exclusive for Covid, with a positive antigen test, even though Covid was not her main concern at this time. She had a very bad bug in her gut (Clostridium Difficile) and Acute Pancreatitis. In this public hospital, they put her in the ICU for around 8 days, and the doctors and nurses all though she was not going to make it.

When I first heard she had gone to the hospital, I started praying to The Lord through the intercession of Luisa. I very often lack the faith to pray this way, but this time, I was “commanding”…. I was telling The Lord, through the Intercession of Luisa, that “when Reina got to Heaven, she meets Luisa, and Luisa sends her back to earth, because Reina has 5 kids, that need her”. I talked to Jackie about this, and she started praying in The Divine Will for Reina too. Somehow I had the certainty that this is what was going to happen…. I was praying so much. I asked The Lord that Reina sees Luisa, so I know that it was through her intercession that she got well.

She got out of the hospital after two weeks. I had just learnt that she had gotten out of the hospital, but hadn’t talked to her at all. When she came to house, I asked her “When you died and went to Heaven, did you see and old lady?”…. and she goes like, Yes!!! She did not know who this old lady was…. And I showed her a picture of Luisa, and she goes like: “That is the lady that I saw shen I was dying!!!!”.

Here is her testimony of how things happened:

“At the end of July I got Covid, and it was very hard. They were five very hard days, in which I felt like I was running out of breath. On the fifth day, a person with hair shiny like rays of sun appeared to me, dressed in white, and in his hands he had a cloak. He told me that he was one of the angels who cares for people in the last moments of their lives. I asked him why all this was happening to me, and he told me that it was necessary for me to suffer. Then I saw Mariano (my second husband who died from COVID last year) and told me to hurry up. Then I saw a bright light like a sun, and there were people on the other side, and Mariano was on the other side. Mariano was together with an old lady (she does not think it was Luisa) who told him that my time had not come yet. When I was about to walk to where Mariano was, I I saw Ian (6-year-old son) and Estefania (10-yearold daughter) hugging my mother, and my grown children were crying. I told Mariano that I was not going with him, because I could not leave my children. I slowly started to feel better.

Within 3 months of that, I became ill again. On October 18, I started with a stomach ache, and I was diagnosed with acute pancreatitis, and again Covid. They took me to the National Hospital of the Industry Park, (a hospital that was created by the Covid emergency).

They put tubes in my nose and an oxygen mask, and told me it was very serious because I had severe pancreatitis and a gut infection of Chlostridium Difficile. Doctors told me that my condition was very serious, and that I had to fight to live, for my children, and placed me in the ICU, isolated from all other patients.

During the time I was unconscious, I saw deceased relatives (two sisters of my mother and a nephew who had passed not so long ago) who welcomed me to the beautiful place I was entering. My aunts told me not to be afraid and to keep on walking, and to Trust The Lord, that I was to Open my heart and not my eyes.

I also saw my first husband, Rodrigo and his grandmother. They welcomed me, and told me that the pain had ended, and to keep walking.

As I was walking, and I saw Luisa sitting, in a like courtyard with a beautiful floor, like a mirror, and she had lots of children around, and she was like singing and playing an instrument similar to a harp. She told me not to be afraid, and to keep walking. I then saw myself in a mirror, and I looked like was about 20 years old.

I went for a little bit through a horrible dark place in which I heard murmurs, and screaming, moaning, wailing, calling for forgiveness and groaning. It seemed to me like people were suffering, and I was scared, but I remembered what my aunts had told me about Trusting The Lord. At this moment, I felt someone grabbing my hand and pulling me around. I told this being that I was not evil that I did not belong to the dark, that God was my father. He told me that he wasn’t evil either, but that he was there because of what he had done during his life. He told me that he was sad to be there, but that he knew God was going to get him out soon. I told him that I didn’t want to be there, and I asked God to get me out of there. Then I felt a push and appeared in another place with light and I saw my two aunts again. They told me that all that I was to keep asking God for forgiveness. That is when I saw Luisa the second time. She was sitting as looking at a beautiful landscape, where there were flowers and trees, and she was looking down, and there was another lady sitting next to her. At this time, I noticed I was barefoot, wearing a white dress and with my hair down. I felt very peaceful and was not afraid at all. Luisa told me to remember that which I most loved while on Earth, and I remembered my children. At that moment, I saw like in a mirror, my 17-year-old son crying, with flowers in his hand, and I saw the gravestone with my name on it.

Then I got scared and started crying, and started telling God off. I told God that I had little kids, and they needed me still. I told him that He had taken away my two husbands, and that I was tired of having to fight all His battles, and asked Him why it was that I had to suffer so much. I told him that I am just a little girl who had gone through much pain, and that He had left me alone. That I was just a little girl in need of love, and asked that He please allow me to stay alive to look after my children.

Then I heard His voice saying “I am your Father” and felt like He took me in His arms, and patted me on the back, like I was a baby. He then said “My little girl”. In His arms, I felt happy to stay, I felt like I belonged there. I asked Him to forgive me for all my sins, and felt relieved of all the guilt I had, and I told God that I accepted His Will, but I also asked Him to please allow me to live, to look after my children. Then I felt like I was pushed back in to my body and I woke up! I asked to talk to my son over the phone. At various moments, from the hospital they had called my family to say that I was in a very grave state, and that they should be prepared for the worst news. The Social Worker called my children to tell them to keep on praying for me, that I was fighting for my life.

As soon as I woke up, I felt like nothing had happened to me. All the doctors and nurses were amazed! They kept me in the hospital for one more week, because they couldn’t believe I was so well.”

I think The Lord allowed Reina to experience all this, also so that I would be FAITH-FULL.

Permanent link to this article: https://bookofheaven.com/luisa-saved-my-life/another-miracle-through-luisa/ 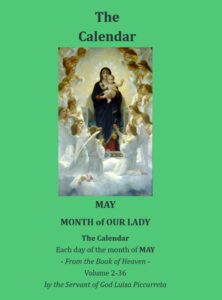