Return to Our Lady of America

The Immaculate Tabernacle of the Indwelling God

Our Lady of the Divine Indwelling

All the Glory of the King’s Daughter is Within 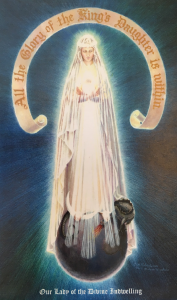 From 1940 to near 1980 Our Lord and Our Lady communicated to a chosen soul, Sr. Mary Ephrem of the Sisters of the Precious Blood throughout her assignments within the Order, including at Rome City, Indiana, USA. Except on a few occasions, as when She showed Herself as Our Lady of the Divine Indwelling and the other of the Twelve Ways, Our Lady always came to Sister Mary Ephrem in the manner in which She Appeared on September 26, 1956, namely, as Our Lady of America. In a letter written to the Archbishop, (Archbishop of Cincinnati, Imprimatur: +Paul F. Leibold, V.G. Cincinnati, Jan. 25, 1963) Sister Mary Ephrem outlines Our Lady’s wishes – “It is to the Hierarchy, especially of the United States, that Our Lady is making Her Plea. They are Her favorite sons, placed in high offices in order that they might do the most good. She Herself has Spoken thus to me…Our Lady has asked that a statue be made as She Appeared on Sept. 26th, 1956 (Our Lady of America). After being solemnly carried in procession to the Shrine of the Immaculate Conception in Washington DC, She desires that there it be enshrined in a place of honor and venerated in a special way as ‘Our Lady of America, the Immaculate Virgin’. She desires also that a small statue or picture of the same likeness be honored in every home.”

On November 22 and 23, 1957, Our Lady Appeared to Sister Mary Ephrem as Our Lady of the Divine Indwelling:

“Our Lady Appeared, standing on a globe, Her right foot resting on a crescent moon, the left on the snout of a small fire breathing dragon. She was Dressed all in White and Her hair could be seen through Her transparent Veil which was long enough to half envelope the globe. The Veil was held about Her head by a Wreath of White Roses, and a White Rose rested on each foot. On Her breast, the Triangle and the Eye, the symbol of the Divine Indwelling, could be visibly seen. A strong Beam of Light shown from the Divine Presence within Our Lady onto the globe at Her feet. Then halfway around the figure of Our Lady above Her head Appeared a Scroll on which were written in letters of Gold the Words: “All the Glory of the King’s Daughter is within” (also in Psalm 44). Though it did not appear that Her lips moved, I heard these words quite plainly: ‘I am Our Lady of the Divine Indwelling, Handmaid of Him Who Dwells within.’ (http://www.mysticsofthechurch.com/2016/06/sr-mildred-mary-ephrem-neuzil-and-our.html)

The fact that the Blessed Trinity Dwells in the just is beyond question. St. Paul wrote: “Know you not that you are the temple of God, and that the Spirit of God dwelleth in you?” (I Corinthians 3, 16). But not only the Holy Spirit, but also the Father and Son Dwell there, for “If anyone love Me he will keep My Word; and My Father will Love him, and We will Come to him, and will make Our Abode with him.” (John 14, 23). Servant of God, John A. Hardon, S.J., “Course on Grace – Part Two – B Grace Considered Intensively Chapter XIII. Sanctifying Grace and the Indwelling Trinity” – available: http://www.therealpresence.org/archives/Grace/Grace_004.htm[March 31, 2016]

Note: about the “Triangle and the Eye” symbol – what was once a benevolent symbol of the Creator watching over the world has now been hijacked by a dark agenda and turned into a sinister symbol of control. The all-seeing eye was for thousands of years a symbol of the Light, Protection from evil, and a Benevolent God watching over creation.

Prayer to The Most Holy Indwelling Trinity

O my Love, my only Good, Most Holy Trinity, I adore You, hidden in the depths of my soul.  To You, to Your honor and glory, I dedicate my life.

May every thought, word and deed of mine be an act of adoration and praise directed towards Your Divine Majesty enthroned in my heart.

O Father, Infinite Goodness, behold Your child, clothed in the likeness of Your Son.

Extend to me Your arms that I may belong to You forever.

O Son, Divine Lord, made man, crucify me with Yourself that I may become, in union with You, a sacrifice of praise for the glory of Your Father.

O Holy Spirit, Fire of Everlasting Love, consume me on the altar of Divine Charity, that at the end of life, nothing may remain but that which bears the likeness of Christ.

O Blessed Trinity, worthy of all adoration, I wish to remain in spirit on my knees, to acknowledge forever Your reign in me and over me, to Your everlasting glory.

Through the Immaculate Heart of Mary and the pure heart of St. Joseph, I consecrate my life to Your adoration and glory.

At the moment of death, receive me, O my Triune Love, that I may continue my adoration of love through all eternity.  Amen. 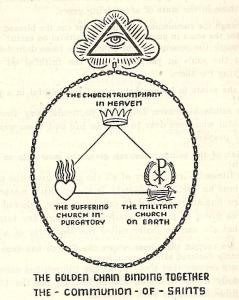 The Communion of Saints — Sanctorum Communionem — as explained by Father Connell’s ‘The New Baltimore Catechism No.3, published by Benzinger Brothers, Inc. in 1943:
…we shall study the doctrine of the Communion of Saints, which tells us that all who are united to Jesus Christ by sanctifying grace form one great society, with its members on earth, in Heaven and in Purgatory.

…By ‘the communion of saints’ is meant the union of the faithful on earth, the blessed in Heaven, and the (Holy) souls in purgatory, with Christ as their Head. The word ‘communion’ as we use it here has no reference to Holy Communion; it means here ‘union’ or ‘society’ or ‘fellowship’.

The word ‘saints’ in the expression ‘communion of saints’ does not mean only persons of extraordinary holiness; it means all those in the state of sanctifying grace.

Through the communion of saints, the blessed in Heaven can help the (Holy) souls in purgatory and the faithful on earth by praying for them.

The saints in heaven help in a particular way those of the faithful who were dear to them in life and those who ask for their prayers.

…The Church is infallible in canonizing saints… We know… because it is a revealed doctrine that the saints in Heaven are to be venerated, and the Church could not teach this doctrine in a practical way unless she could name with infallible certainty, some particular saints in heaven.

On the suffering Holy souls in Purgatory: The faithful on earth, through the communion of saints, can relieve the sufferings of the souls in purgatory by prayer, fasting, and other good works, by indulgences, and by having Masses offered for them. The Church prays for ‘the faithful departed’ in the Mass and in the Divine Office, especially on November 2nd, All Souls’ Day.

Permanent link to this article: https://bookofheaven.com/our-lady-of-america/the-immaculate-tabernacle-of-the-indwelling-god/ 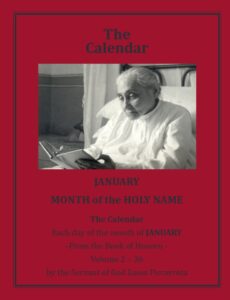