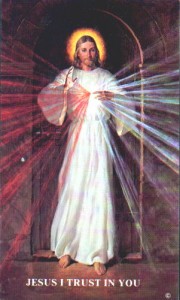 – Pope Benedict XVI elected this day 2005 – “…In the joy of the Risen Lord, confident of His Permanent Help, let us go forward. The Lord will Help us. Mary, His Most Holy Mother, is on our side.”

Click on video below for an important Divine Mercy message for today! 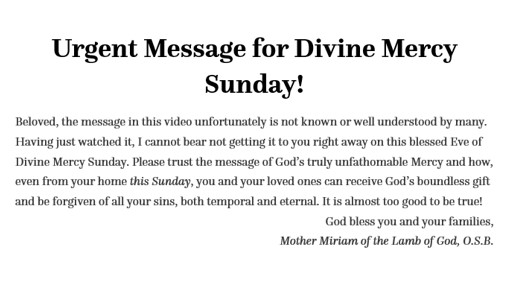 Biographical notes about the Servant of God Luisa Piccarreta 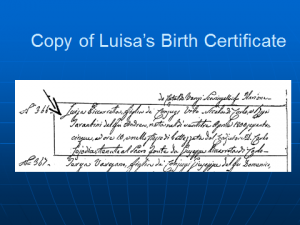 The Servant of God Luisa Piccarreta was born in Corato, Italy in the Province of Bari, on April 23,1865 and died there in the odor of sanctity on March 4, 1947.

Luisa was born on the first Sunday after Easter (now celebrated as Divine Mercy Sunday) and was Baptized that same day. Her father – a few hours after her birth – wrapped her in a blanket and carried her to the parish church where holy Baptism was administered to her.

Continuing in my usual state, I found myself outside of myself, and I saw a multitude of people, and in their midst one could hear noises of bombs and gun shots.  People were dropping dead or wounded, and those who were left would flee up to a building nearby; but the enemies would go up there and kill them, more surely than those who remained outside.  So I said to myself:  ‘How I wish I could see whether the Lord is there in the midst of these people, so as to say to Him:  ‘Have Mercy – pity on these poor people!’  So I went round and round and I saw Him as a little Child; but little by little He kept growing, until He reached the perfect age.  I drew near Him and I said:  ‘Amiable Lord, don’t You see the tragedy that is happening?  You don’t want to make use of Mercy any more?  Do You perhaps want to keep this Attribute as useless, which has always Glorified your Incarnate Divinity with So Much Honor, forming a Special Crown on Your August Head, and Bejeweling You with a Second Crown, So Wanted and Loved by You – which are the souls?’

Now, while I was saying this, He told me:  ‘Enough, enough, do not go any further; you want to speak of Mercy, and what about Justice – what are we going to do with It?  I have told you and I repeat to you:  ‘It is necessary that Justice follow Its course’.”  So I replied:  ‘There is no remedy – why then leave me on this earth when I can no longer placate You and suffer in the place of my neighbor?  Since it is so, it is better if You let me die.’  At that moment I saw another Person behind the shoulders of Blessed Jesus, and He told me, almost making a Sign with His Eyes:  “Present yourself to My Father and see what He tells you.’  I presented myself, all trembling, and as soon as He saw me, He told me:  “Why have you come to Me?”  And I:  ‘Adorable Goodness, Infinite Mercy, knowing that You are Mercy Itself, I have come to ask for Your Mercy – Mercy on your very images, Mercy on the works Created by You; Mercy upon no other but your creatures themselves.’  And He said to me:  “So, it is Mercy that you want.  But if you want True Mercy, after Justice has Poured Itself out It will Produce Abundant Fruits of Mercy.”  Not knowing what else to say, I said:  ‘Father, Infinitely Holy, when servants or people in need present themselves before their masters or rich people, if these are good, even if they do not give everything that is necessary for them, they always give something.  And to me, who have had the good of presenting myself before You, Absolute Master, Rich without limit, Infinite Goodness, don’t You want to give anything of what this poor little one has asked of You?  Does a master perhaps not remain more honored and content when he gives, than when he denies what is necessary to his servants?’  After a moment of silence He added:  “For Love of you Luisa, instead of doing ten, I will do five.”  Having said this, They Disappeared, and in several places of the earth, especially of Europe, I saw wars, civil wars and revolutions multiply.” 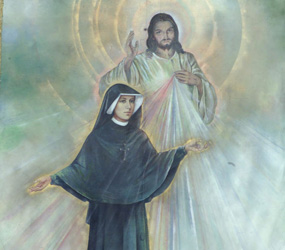 Saint Faustina Kowalska, in her diary on Divine Mercy, wrote that Our Lord said to her: “I Desire that the first Sunday after Easter be the Feast of Mercy. On that day the very Depths of My Tender Mercy are open.” (Source: Divine Mercy in My Soul, 1987, Sister M. Faustina Kowalska)

Jesus emphasized to Saint Faustina that the Depths of His Mercy were already open on that day, long before official recognition of the Feast by His Church. With the birth of Luisa Piccarreta on the day which would eventually be proclaimed the Feast of Divine Mercy, Jesus left a special Sign of the unique importance of Luisa’s Mission, which her special confessor, Saint Annibale Maria Di Francia, described as “the Triumph of the Divine Will in the entire universe.”

Permanent link to this article: https://bookofheaven.com/feasts-and-novenas/divine-mercy-sunday/