Virgin of Revelation – Our Lady of Tre Fontane 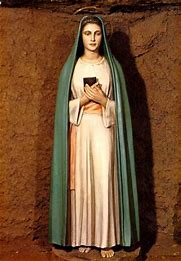 (The Virgin of Revelation appeared at Tre Fontane, Rome, April, 12, 1947 – 40 days after the Transit to Heaven of Luisa Piccarreta)

I am who I am in the Divine Trinity

The Virgin Mary reminds us that She is intimately connected to the Most Holy Trinity: She is the daughter of the Father, the Mother of the Son and the Spouse of the Holy Spirit.

‘God the Holy Spirit, being barren in God – that is to say He does not produce another divine person, becomes fruitful by means of Mary whom he espoused. It was with her, in her and of her that he produced His Masterpiece, God-made-man, and that He goes on producing daily until the end of the world, the members of the body of that adorable Head. For this reason, the more he finds Mary his dear and inseparable spouse in a soul, the more powerful and effective he becomes in producing Jesus Christ in that soul, and that soul in Jesus Christ.’ Saint Louis de Montfort: True Devotion to the Blessed Virgin Mary – I am the Virgin of the Revelation

The Magisterium of the Catholic Church teaches that throughout the Bible or Divine Revelation, there are references to Mary and the special graces conferred on her by God. Without the teaching of the Magisterium of the Church, in fact, you run the risk of giving a subjective interpretation to the Word of God in order to endorse the perspective of a particular individual like Bruno Cornacchiola.

Mary’s presence in Sacred Scriptures is illustrated beautifully in Pope Benedict’s first encyclical letter of his pontificate where he wrote: ‘how completely at home Mary is with the Word of God, with ease she moves in and out of it. She speaks and thinks with the Word of God. Here we see how her thoughts are attuned to the thoughts of God, how her will is one with the Will of God.’ Deus Caritas Est No 41

Our Lady to Bruno: “You persecute me! Enough now return to the Holy Fold, the heavenly court on earth (the Catholic Church) be obedient to the authority of the Pope…. Return to the pure font of the Gospel.”

The Virgin Mary, through Bruno, exhorts all who are outside the Catholic Church (Holy Fold) to enter or to return because it is founded by Jesus Christ on Peter and His Apostles. The Church is the universal ‘Sacrament of Salvation’ for all of humanity. Mary invites us to return to the pure fount of the Gospel, that one finds only in the Magisterium of the Church, that is in the Holy Father and the Bishops united with him.

In the following days (April 1951) I (Bruno)travelled to some conferences in the Puglia Region. Then while writing in the bedroom at the Parish of Corato…

I heard some noises, as if the house was about to collapse. I got the impression that the devil wanted to scare me, so I let him perform, His doing was of no concern to me. I continued writing. Suddenly I saw myself surrounded by huge big dogs, snarling fearfully in my direction as if to bite at my legs, hands and face. I continued writing and prayed. My thought was on Jesus who is always waiting there in the adoration chapel. I went and in a loud voice exclaimed, Ave Maria. In pronouncing this name a shiver ran through my whole body, from my head to my toenails. I saw the snarling dogs running and they left me in peace. I descended into the church before Jesus and heard the ring of a bell for the commencement of the Mass, then silence. Who rang the bell as I was alone and did not see anyone?  (Luisa is referenced by Our Lady, Santa Maria Greca Parish Church where she is buried in Corato, as the little bell)

Our Lady then said to him (a later date):

“On 12 April 1980 next year for the thirty-third anniversary of my coming at the Grotto. This will be the same day as the Saturday in the octave of Easter in 1947: in a special way, for the occasion next year, I promise many powerful physical and spiritual graces, in the spiritual and corporal way. To those who ask with faith and love. On that day I will accomplish a great phenomenon of the sun, to draw unbelievers to the living faith. You are to remain silent, do not speak: do not say anything. “ (…)

When that day arrived: The crowd which gathered at the grotto was numerous. While waiting for the Mass, Bruno Cornacchiola led the recitation of the rosary. He addressed those present with some spiritual thoughts and gave testimony to the events that occurred in 1947. The sun illuminated his face:

“I saw the sun just above the trees tops so majestic and brilliant as ever! After about an hour and twenty minutes (from 15:20 to 16:40), I noticed that the sun had not moved, from the point I described above, it was always there in front of me above the treetops. “

But then the description became more animated:

“I saw the sun split, staying firmly in one place, as I had seen in the beginning; another sun went over the Grotto and the whole Grotto was illuminated towards the direction of the cross – it also was all lit up, without electricity- I saw the sun beginning to spin like a carousel, advancing and retreating: it was alive and dense, it seemed as boiling water, like a furnace melting steel. Its glow was so strong that it leads my thoughts to the light I saw in the Grotto when the Virgin of Revelation appeared to me for the first time, on a thick mound of volcanic rock. I saw the three distinct colors emanating from the sun: green on the outside, pink on the inside and white in the center. Everything was dramatically spinning, spinning. I remained in silent meditation; then I saw the sun, from above the treetops, join into the other sun above the Grotto. “Around 1700 hours the Mass began and until 17:50 at the moment of consecration:

“Like an earthquake, a roar was heard; I shouted: ‘Long live Maria’ three times.”

“Therefore, the statue inside the Grotto appeared as enflamed. Someone shouted that it was glowing. Word spread at the display of light in the sky and everyone looked up. At the point in the Mass when the Our Father is recited, proceedings were momentarily interrupted, and for half an hour, until at 18.20, everyone could watch the replication of the Fatima events that of 13 October 1917.“

The true church of my Son was founded on three white loves: the Eucharist, the Immaculate Virgin Mary and the Holy Father

The ‘three white loves’ are the qualifying points of the Catholic Faith that make up part of the treasure of the Church. Our Lady desired that they are particularly recalled, known and loved by all with constant dedication because this truth of salvation has always fought in the world and will do so ever more in the future.

‘Here is the true Church,’ reaffirmed Bruno, ‘the Church that lives the Eucharistic Jesus that recognizes the Immaculate Mary, the Most Holy Mother that obeys and defends the Holy Father. We love the Pope!’ He would conclude with, ‘…and we live this unity of love and obedience with Peter. He that doesn’t want to live it is opposed to Christ’s Will, which wants his followers to be ‘perfected in unity’.’

The nine First Fridays in honour of the Sacred Heart, the Divine Promise, have saved you

Bruno’s wife, Iolanda, continually maltreated by Bruno because she didn’t want to leave the Catholic Church and accept Protestantism, as a last hope, persuaded Bruno to make the devotion of the nine First Fridays of the month. She hoped and prayed for his agreement to receiving the Eucharist, all be it without confession, on the nine first Fridays of the month in order to gain his conversion. Bruno made the pious devotion but on its completion had not changed his opinion and so after ‘failing the test’ Iolanda also became a protestant. However, the Lord maintained the promise attached to this devotion of the nine first Friday’s entrusted to St Margaret Mary Alacoque, and the Virgin of Revelation confirmed this fact to Bruno during the apparition saying: ‘The nine first Friday’s in honour of the Sacred Heart, that your faithful wife convinced you to observe before you entered on the road of lies have saved you’.

My body could not decay and did not decay, I was taken to Heaven by My Son and His Angels

The Virgin of Revelation anticipated the definition of the Dogma of the Assumption, which was proclaimed by Pope Pius XII on the 1st November 1950.

The Catechism of the Catholic Church number 966 summarizes the Dogma of the Assumption quoting the words of Pope Pius XII:

“Finally the Immaculate Virgin, preserved free from all stain of original sin, when the course of her earthly life was finished, was taken up body and soul into heavenly glory, and exalted by the Lord as Queen over all things, so that she might be the more fully conformed to her Son, the Lord of lords and conqueror of sin and death.” – Pius XII, Munificentissimus Deus (1950) The Assumption of the Blessed Virgin is a singular participation in her Son’s Resurrection and an anticipation of the resurrection of other Christians:

Pray incessantly and recite the Holy Rosary every day for the conversion of sinners, unbelievers and the unity of Christians

“Mary’s words are more than ever relevant today now that the dark clouds of hate and division seem to present themselves on the horizon of the third millennium. When reciting the Holy Rosary, the faithful do not flee the problems of the world but looks at them with ‘responsible and generous’ eyes confident in Divine Intervention because only God can touch the hearts of man to give us true peace”. – Apostolic letter Rosarium Virginis Mariae Pope John Paul II 10/16/2002

Be missionaries of the Word of God

From this invitation, the Missionaries of Divine Revelation have drawn the inspiration for their missionary work based firmly on the will to serve Jesus Christ in the Catholic Church.

OUR LADY OF REVELATION PRAY FOR US!

Permanent link to this article: https://bookofheaven.com/feasts-and-novenas/virgin-of-revelation/